We are grateful for the 2019 legacy gift to the Society from the estate of William E. Phillips, devoted member and benefactor.

The Old Saybrook Historical Society is the caretaker of the documentation of one of America’s earliest settlements, dating from 1635. The Saybrook Colony Legacy Guild has been created to provide long-term support for the research, preservation and maintenance of the heritage of Old Saybrook.

Why become a member of the Saybrook Colony Legacy Guild?

Your bequests are your final guideposts for family and friends – they reveal to those you leave behind your core values and your hope for your community.

Our state-of-the-art Archives are a treasure trove for genealogists, students and area visitors. The thousands of historical documents we collect and catalogue include journals, letters, newspapers, books, photographs and films. The General William Hart House and Gardens complete our campus that is a destination for history buffs and botanists. The museum house features architecturally unique elements such as eight fireplaces, and period furnishings including Lady Fenwick’s chair. Our award-winning Gardens showcase early American plantings such as Moneywort, Lamb’s Ear and Sweet Alyssum.

As a member of the Saybrook Colony Legacy Guild, you will help assure that future generations know, experience and appreciate this special place that began as Saybrook Colony. Gifts can be in the form of cash, securities, real property or treasured objects from your estate.

Please inform us if the Old Saybrook Historical Society has already been included in your Will, Trust or Estate Plan.

If you wish, please briefly describe your gift to the Saybrook Colony Legacy Guild. All information will be kept confidential.

Did you know the Old Saybrook Historical Society can accept donations from your IRA?

If you are 70 1/2 or older, you may transfer any amount, up to $100,000, directly to the Old Saybrook Historical Society. This is referred to as a Qualified Charitable Distribution.

This gift could fulfill some or all your Required Minimum Distribution reducing your income and thus your Federal and Connecticut income taxes.  This is the perfect charitable gift for individuals who can’t claim itemized deductions anymore because of recent tax law changes.

For more information please calls us at 860-395-1635 or email us at contact@saybrookhistory.org.

Amelia Hart Sheffield’s 3-drawer Mahogany writing desk was purchased through the generosity of a direct descendant of Robert Chapman.  It is inscribed “Amelia Hart Sheffield, May 28 1824 Saybrook, Conn” (year she was married) and has all the original hardware.  One of the drawers has a writing surface.  The Society also has her portrait and father’s writing desk. 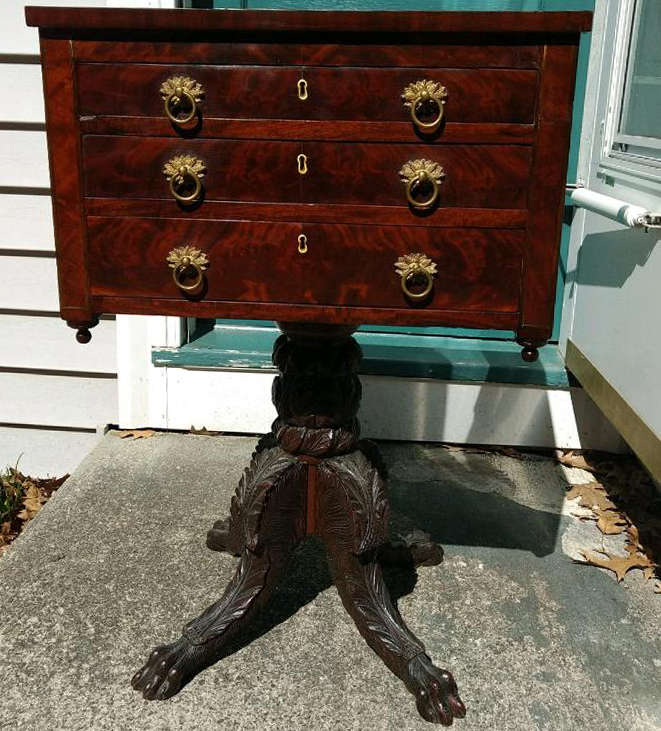 Oil on canvas of John Winthrop the Younger

donated by Marek Sarba, renowned artist and devoted member of the Society. 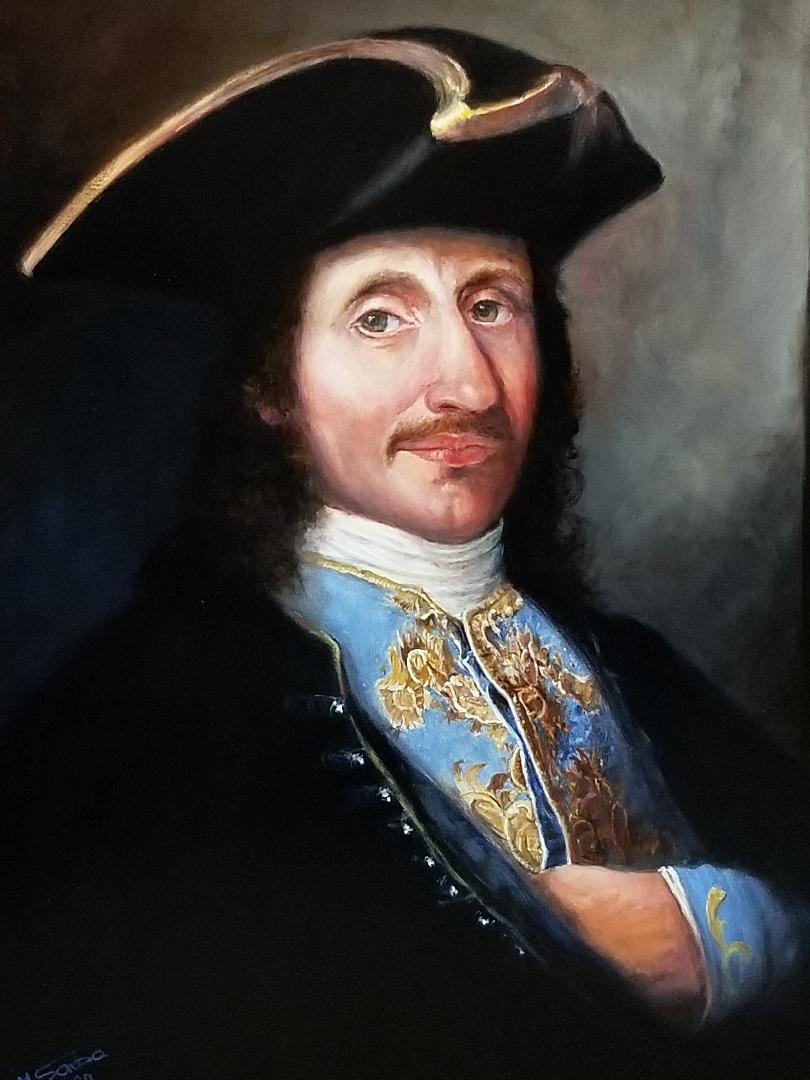 From Georgia to Saybrook – Fourteen Hours and 200 Documents

It is surprising how far Saybrook documents and other materials travel over time and heartening how some eventually make their way home again.  And, the journey often begins with a phone call or email which is how the most recent example began.

Several months ago Historical Society president Marie McFarlin received an email from a women in Georgia asking if we would be interested in Saybrook documents.  Assuring the writer that we would, Ms. McFarlin asked for more information and, with the exchange of several emails over a period of several weeks, was informed that the writer possessed a large number of early 19th century documents.

It turns out that the writer and her husband were renovating the Mercer Spencer house in Woodstock, Georgia.  In the process of renovating the structure they were throwing out trash.  While in the attic above the garage, Carmen Kruger found some old newspapers, a 15’ x 7’ 45 star U.S. flag and an old small trunk.

Opening the trunk she was surprised to find dozens of old letters, deeds, wills, and photos which, along with the flag, were taken home.  They had no idea how they got there but were thankful that they did not just throw them out.

For the next several weeks Carmen and her husband Elliot struggled to read the old script and research the people who originally wrote or received the documents.

They saw that the material came from Saybrook and decided that they should be returned.  Responding to the request for more information, they prepared a list of more than 200 documents.  They also indicated that they would like to sell the entire collection to the Historical Society.

Unable to put a price on the collection and hesitant about sending it through the mail, the Krugers’ made arrangements to bring the documents to Old Saybrook.  They arrived after a 14-hour train ride from Georgia and the following day brought the items to the Archives.

President Marie McFarlin, vice president Wayne Harms and members Tedd Levy reviewed the material and decided it would enrich our knowledge of Saybrook history and be a worthy addition to the Archives.  The entire collection of 200+ items was purchased through the generosity of a member who wishes to remain anonymous.

A sampling of documents recently obtained by the Historical Society: 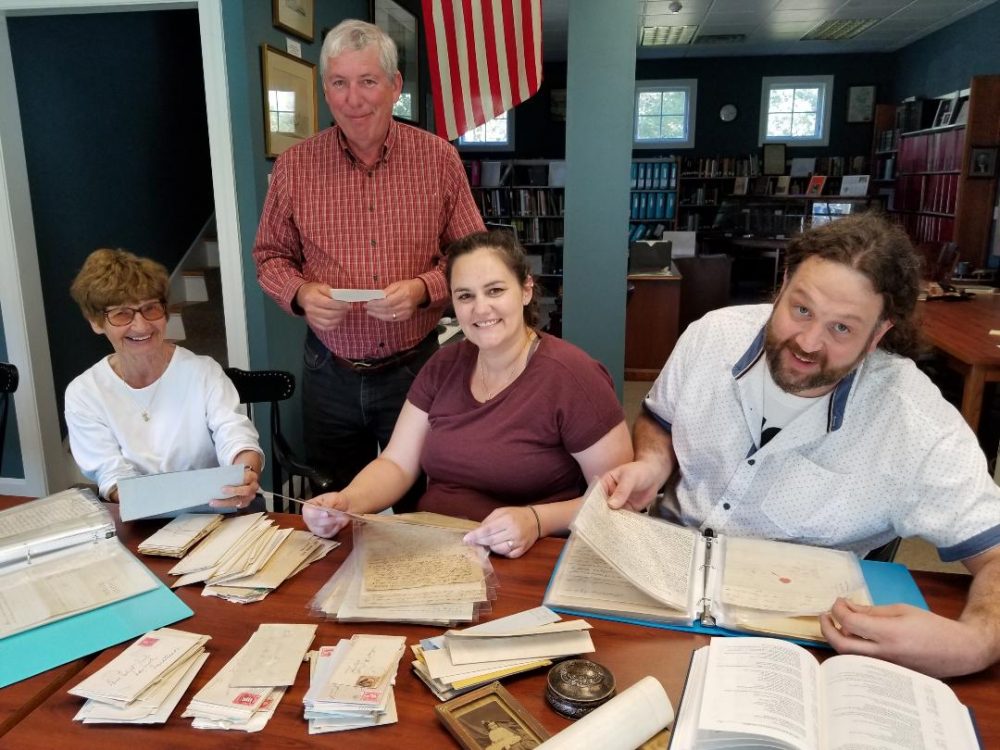 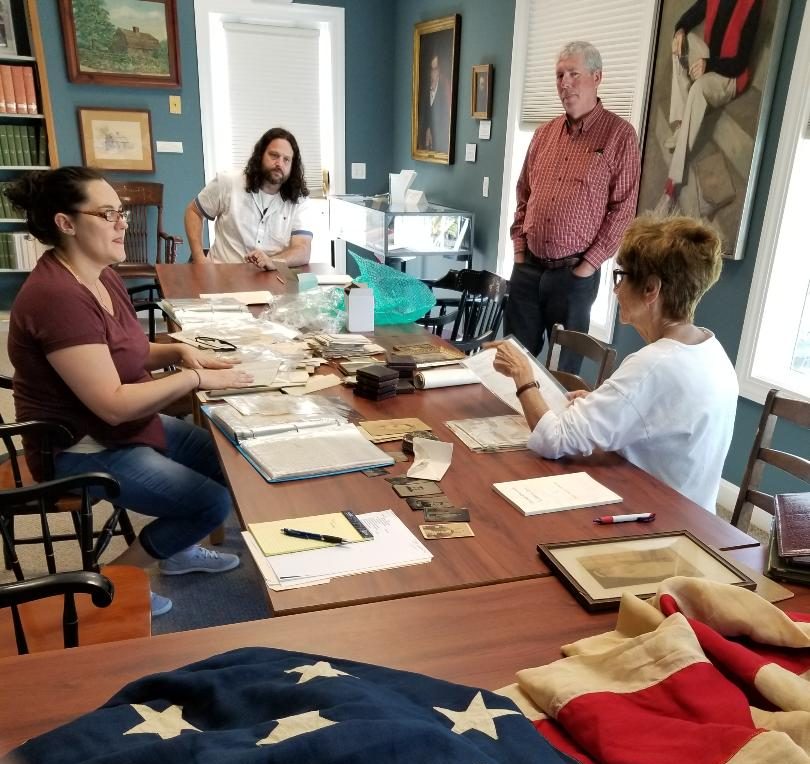 Our Purchase of Sheffield Portraits From the First Church of Christ –  Donation given by a direct descendant of Robert Chapman, one of the first settlers of Saybrook Colony. 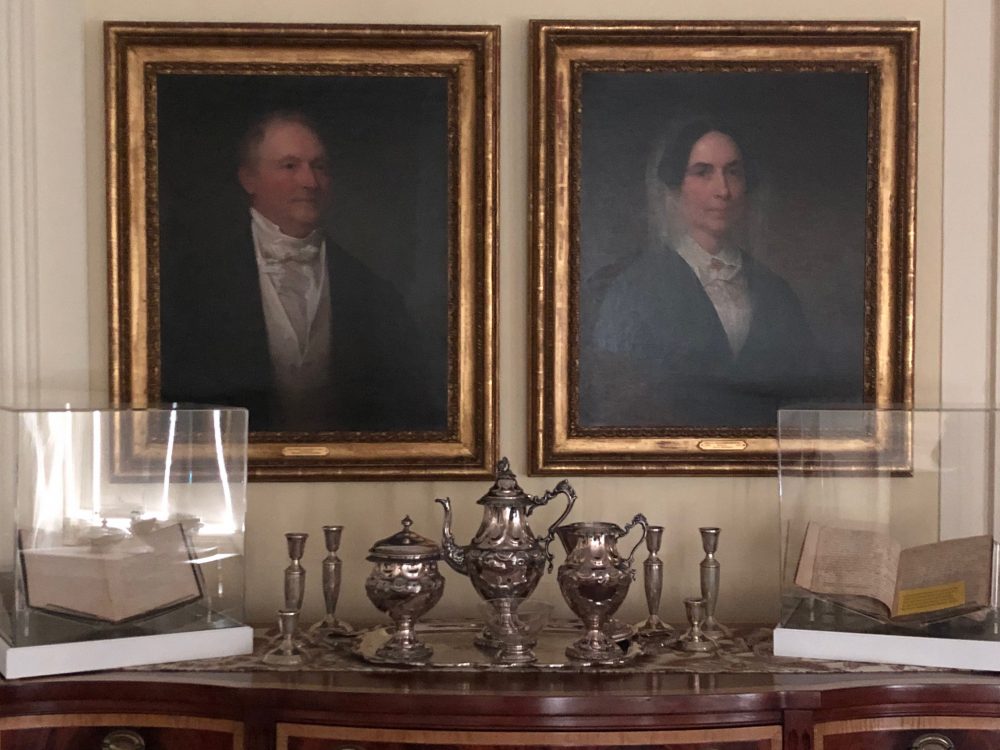 Presented to the Society from the Scoville Family Charitable Fund a Grant of $70,000 for the kitchen and half bath remodel/repair in the General William Hart House.  This charitable fund is devoted to organizations who contribute to the quality of life in Old Saybrook.  The Scoville family has strong ties to the town.  We are very grateful for this generous contribution. 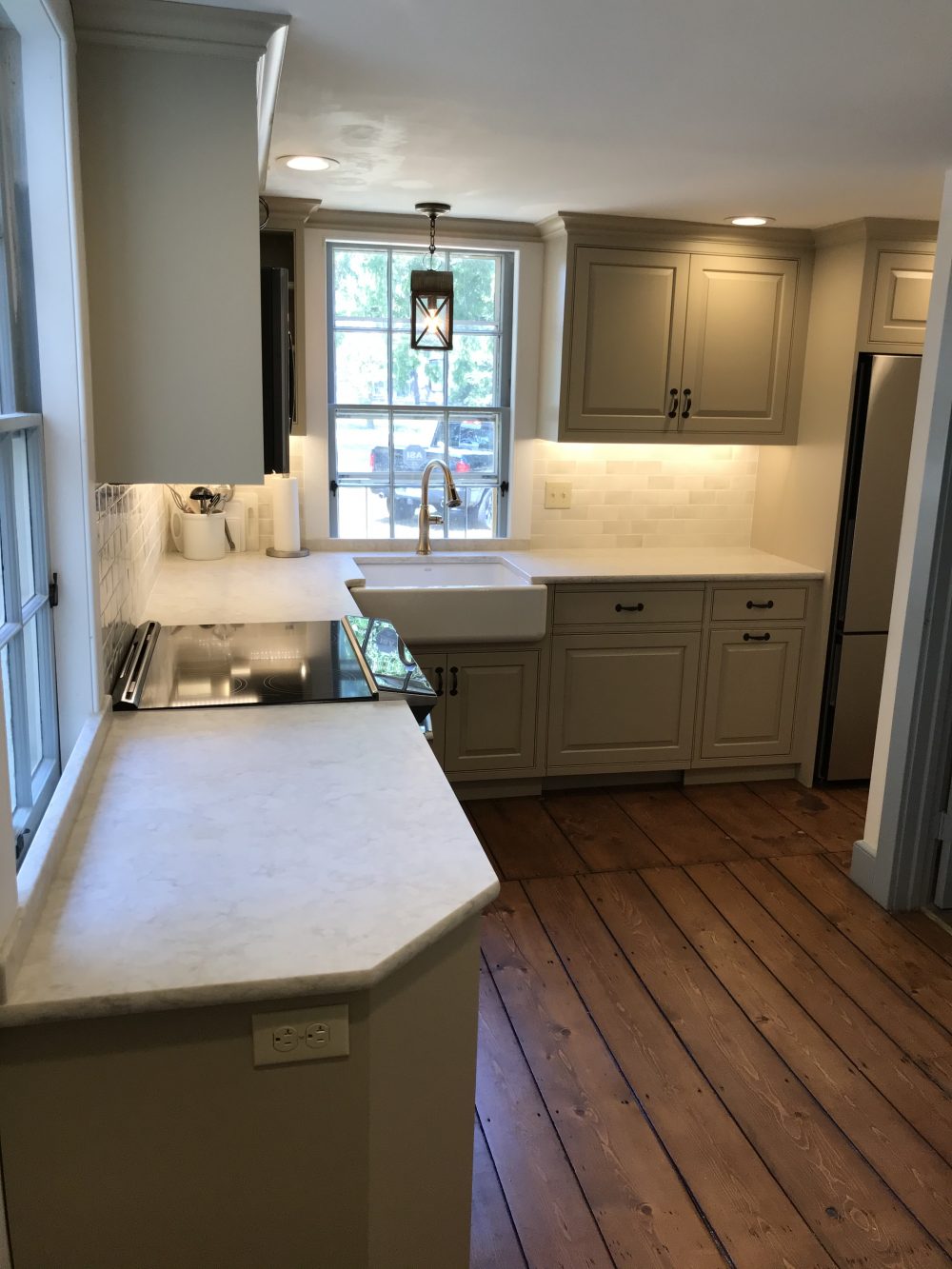 A Question of Survival: Saybrook Fort and the Pequot War, 1636-1637 Exhibit

Sponsored by Quick Grant to the Society –  $4500
From Connecticut Humanities 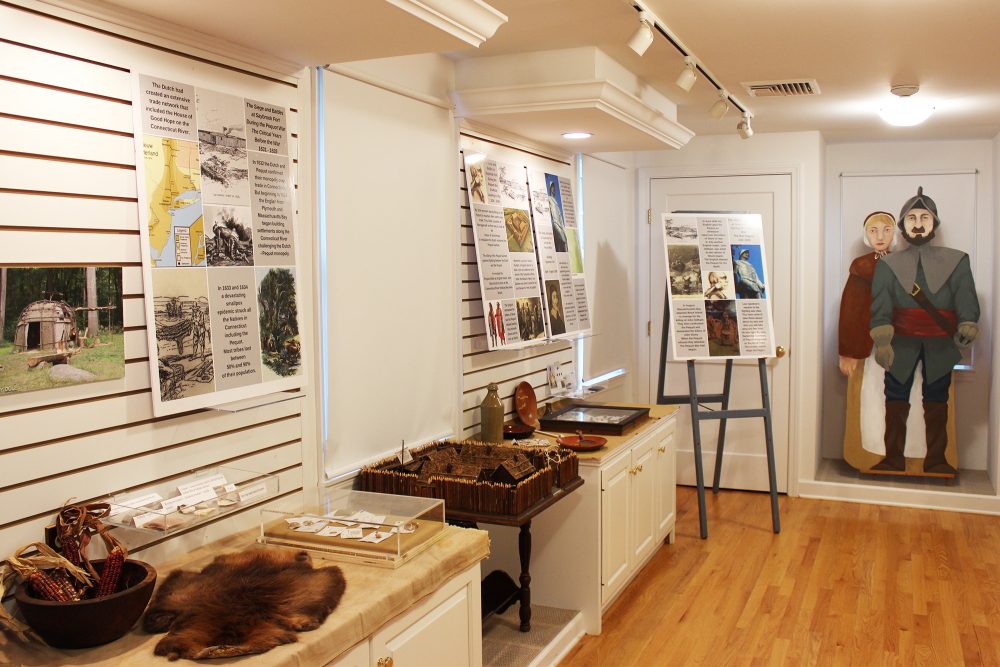 Donated by Elaine Yang – 2019 Senior Project at Old Saybrook High School.
It is a tribute to Bonnie Penders, a Society Volunteer Gardener and mentor to Elaine and to the commitment of the Society to its public gardens. 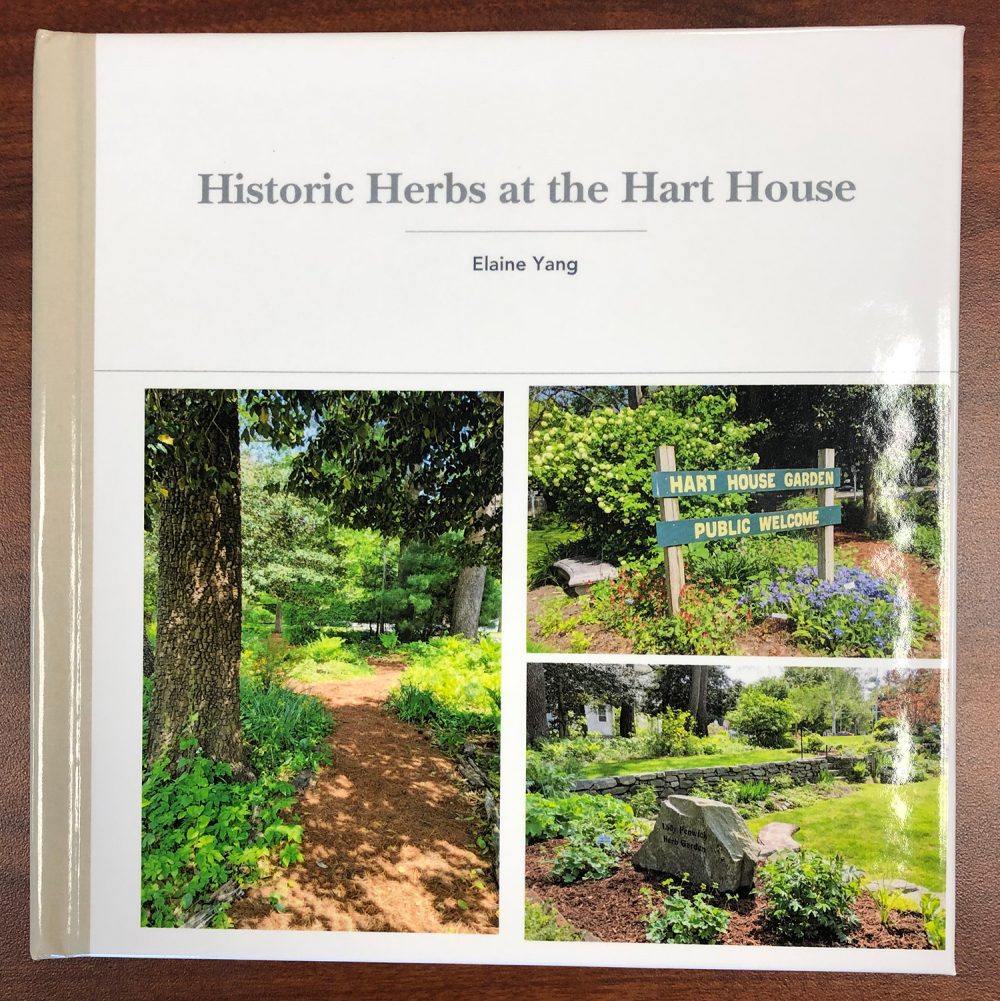 Print of the Powder Horn

— Pamela Vittorio is an associate professor at the New School, historian, linguist, professional genealogist and direct descendant of Oliver Graham. 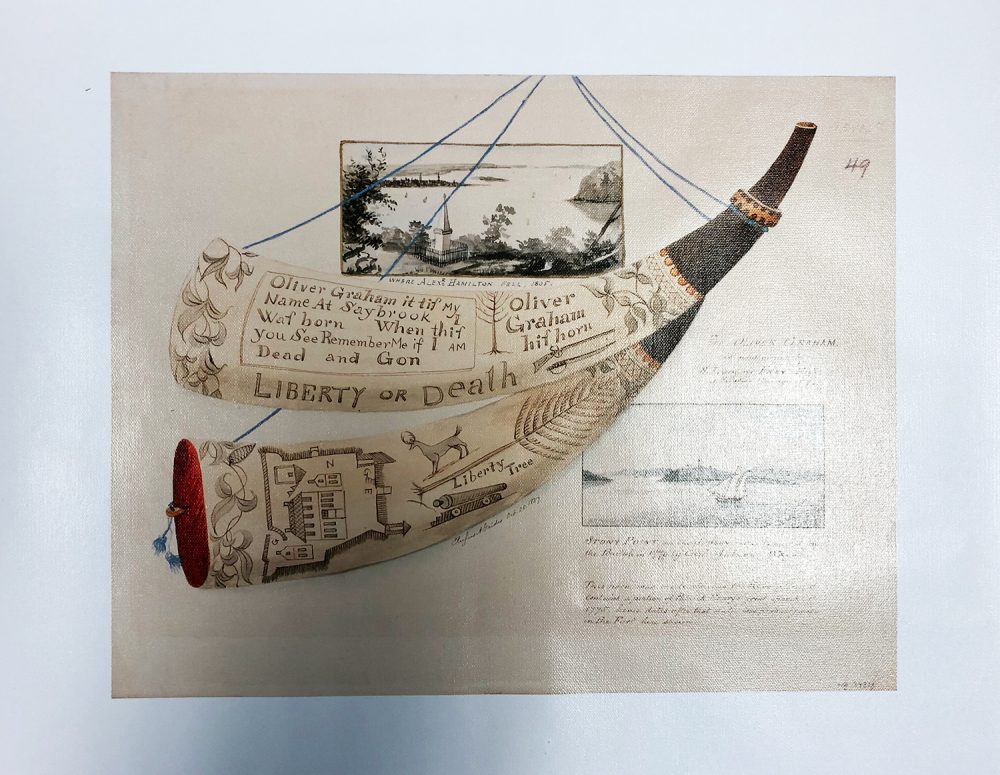 The Society is grateful to the following members for the $15,000 donations to complete the matching funds to apply for a 1772 Foundation Grant to restore all 32 windows in the Hart House: 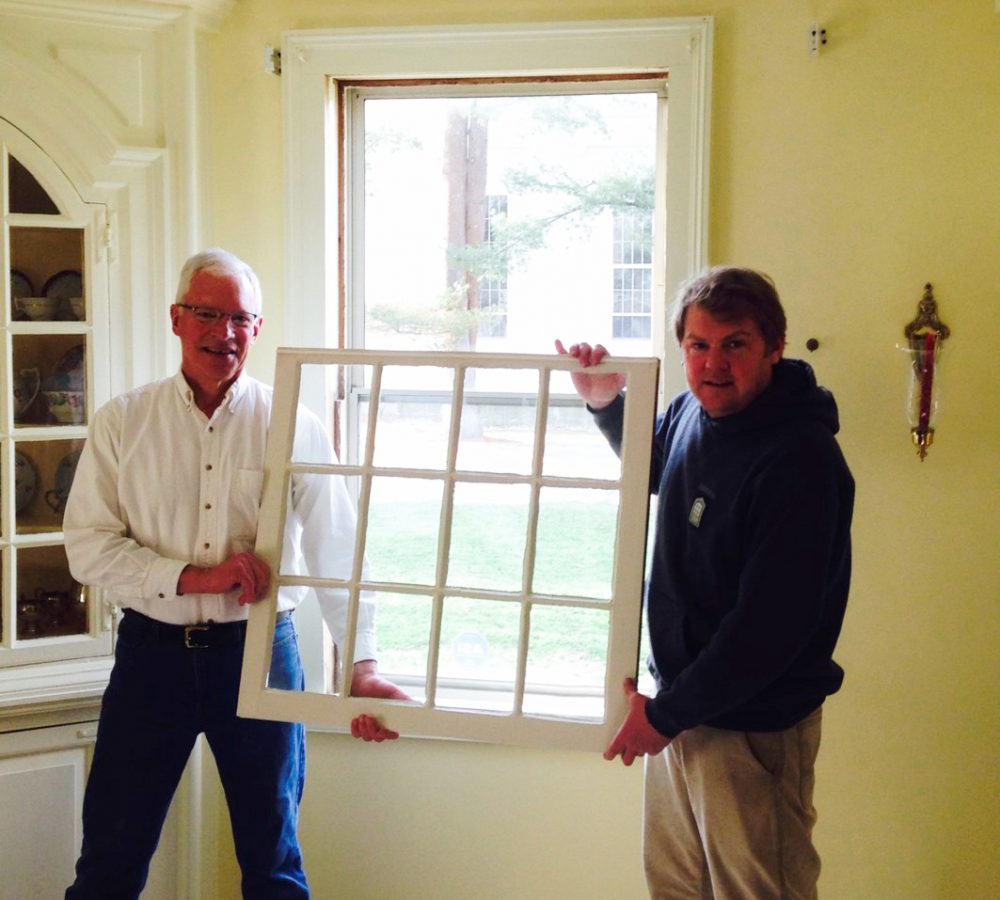 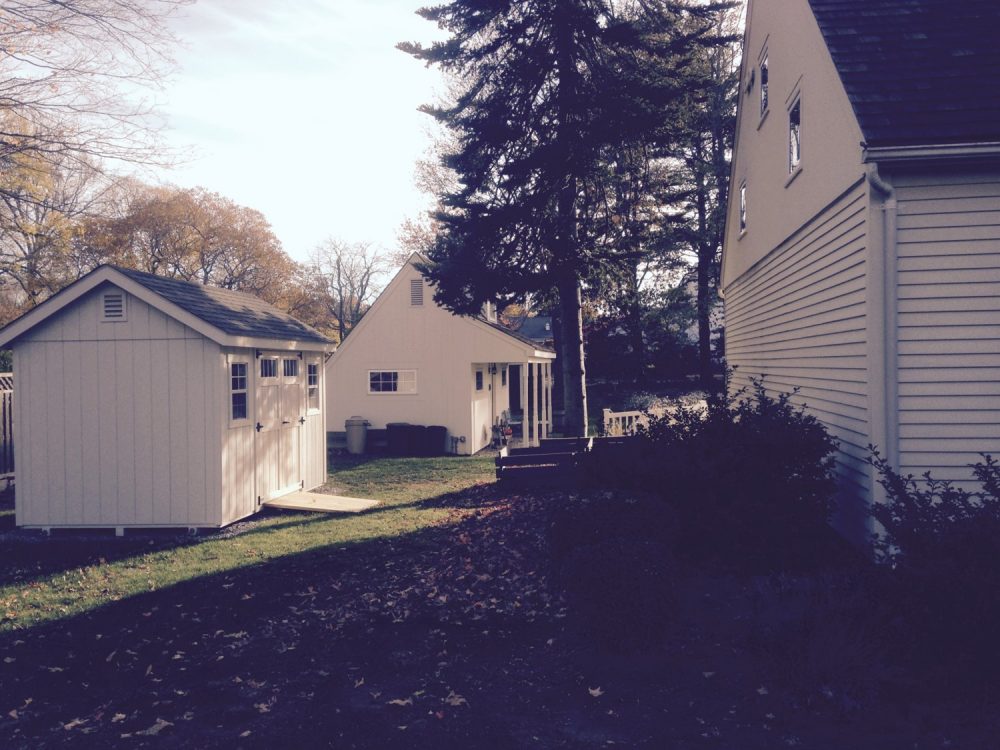 Marek Sarba, the artist and Old Saybrook resident who painted the portrait of General William Hart (below) , also has painted a beautiful portrait of General Hart’s younger brother, Elisha, that he has also donated to the Old Saybrook Historical Society.  The beautiful portrait is hung over the fireplace in the dining room of the Hart House.  Elisha was the father of the seven daughters renowned for their “beauty” and energy.  Elisha and his family lived next door to his parents, Reverend and Mrs. William Hart, near the properties now occupied by the St. John’s Catholic Church and Rectory on Main Street. 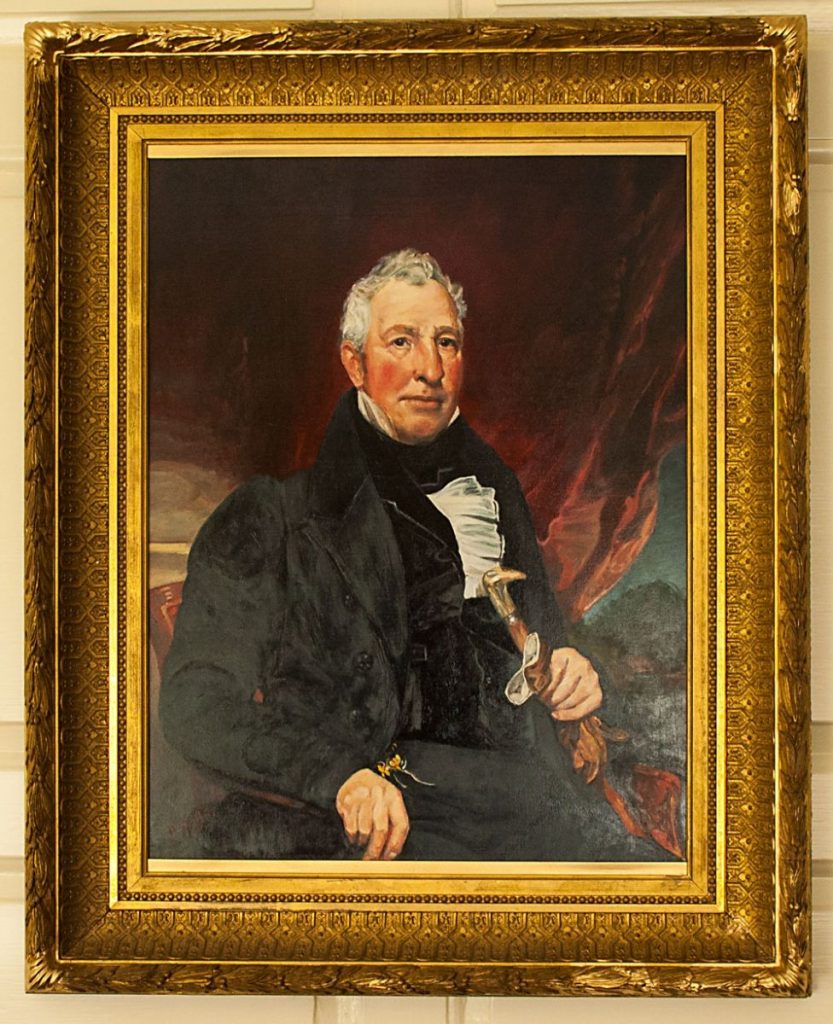 Marek Sarba, an artist and resident of Old Saybrook, at our annual meeting, presented a portrait of General William Hart that he painted for the Society. It was after his first visit to the Hart House this summer that he decided to research and use his talents to do this and gift to our organization. He traveled to the Wadsworth Atheneum to view the small locket that shows the only known likeness of William. His gift is a wonderful work of art. As he spoke to the members, he stressed the importance of history and his admiration for the work of the Society and all its volunteers. Marek’s paintings are on display at Mystic Seaport’s Maritime Gallery, the Historical Society of Maryland, Mariner’s Museum in Newport News, VA, Merchant Marine Museum in Kings Point New, NY, Great Lakes Historical Society, etc. We are thrilled with this special gift. 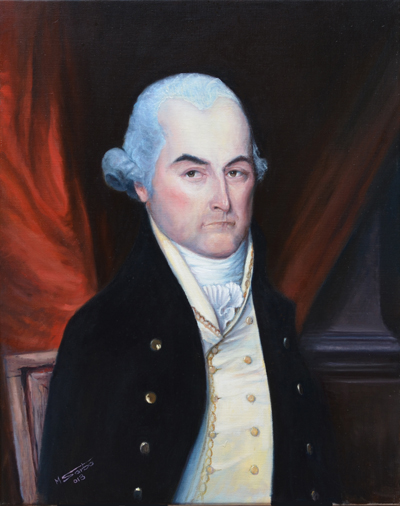