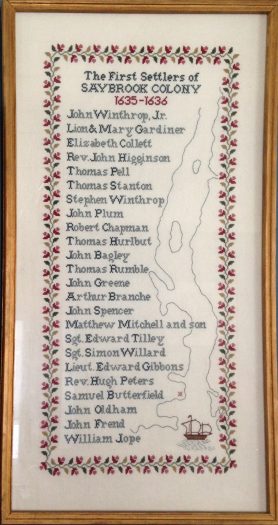 Old Saybrook, located at the mouth of the Connecticut River, was home of the Algonquin Nehantic Indians for years before Europeans arrived. These were peace loving Indians who farmed in the area and had a village at Saybrook Point. Around 1590, the peaceful Nehantic and other gentle Algonquin tribes living in the Connecticut River Valley were conquered by the Pequots, a warlike tribe from the north.

The first European to sail up the Connecticut River was Adrian Block who, in 1614, was sent by the Dutch West India Co. in New Amsterdam on an expedition to explore, map and claim the eastern coast of “New Netherlands” for the Dutch.

At about the same time the Dutch were exploring this area, the English decided to do the same. In 1620, King James I created the Plymouth Colony (also known as the Council for New England) and thereafter, no English settlement in New England was allowed without the Council’s permission.

The Dutch were primarily interested in the fur trade with the Indians along the Connecticut River Valley, and initially only established trading posts for that purpose at several spots along the river, including what is now Hartford, Middletown and Old Saybrook. In 1623, fearing English competition, the Dutch deposited a small group of Dutch men and women at Saybrook Point to establish a permanent colony.

In 1631, the Earl of Warwick, president for the Council for New England, signed a unique deed of conveyance, called the Warwick Patent, to eleven of his closest friends and/or relatives, including the Viscount Saye & Sele and Lord Brooke. A year or so later, four more gentlemen became patentees, including Colonel George Fenwick. Saybrook Point was included in this patent that gave the 15 lords and gentlemen a vast segment of New England stretching from the Narragansett River along the coastline south to about Greenwich, and west from these two points to the Pacific Ocean.

In 1632, the Dutch Governor Van Twiller of New Amsterdam, sent Captain Hans Eechuys to Saybrook Point to formally purchase the point from the local Indians. He then constructed a small fur trading post at the Point and named it Kievets Hook. The following year, the Company established a very successful trading post up-river called the House of Hope at the present site of Hartford.

In 1635 the Warwick Patentees commissioned John Winthrop, Jr. as the first Governor of the river Connecticut territory. In 1635 Winthrop, learning that the Dutch were planning to permanently occupy Saybrook Point, sent a small vessel with 20 men with orders to seize control of the Point. Arriving on November 24, 1635, the Englishmen quickly put ashore two cannon to ward off any attack by the Dutch or the Indians.

Earlier in 1635, Governor Winthrop, Jr. had engaged Lieutenant Lion Gardiner to build a fort and lay out a town, with suitable homes for the gentlemen patentees. In March 1636, he sailed to Saybrook Point along with supplies and 12 men to build the fort. A month later, Governor Winthrop arrived in Saybrook and shortly thereafter named the settlement Saye-Brooke in honor of Viscount Saye & Sele and Lord Brooke. While not the oldest town in Connecticut, it has the oldest English town name and is the oldest on the shoreline.

While the local Indians welcomed the settlers, their Pequot conquerors strongly resented them and were intent on driving them away. As a result, Fort Saybrook was in a constant state of siege and when the settlers needed to tend their crops, armed soldiers had to accompany them.

On April 26, 1636 the Gardiner’s son, David, was born at Fort Saybrook, the first child of European parents born in Connecticut.

In 1639, Warwick patentee George Fenwick arrived at Saye-Brooke with his wife, two sisters and their servants to become its second governor. In 1643, a council for mutual military defense, “the United Colonies of New England” was created between Saye-Brooke, New Haven, Connecticut, Plymouth and Massachusetts Bay and also resulted in the Articles of Confederation being drawn up which was the first constitution of the American people. In 1644, Fenwick, acting as agent of the 14 other patentees, sold the Saye-Brooke Colony to the Connecticut Colony and also turned over to Connecticut the Saybrook Seal.

As Saybrook grew, settlers moved further and further away from the original settlement and, eventually they received permission to form their own parishes so that they would not have to travel so far on Sundays to attend church services. As these outlying parishes grew, they separated from Saybrook and became the present day towns of Lyme, Old Lyme, Westbrook, Chester, Essex, and Deep River.

Because of its location at the mouth of the river, Saybrook became an important center for coastal trade and for trans-shipment from river boats to ocean ships. In the 1700’s and 1800’s along the shore of North Cove, and even extending out onto the river shore near the cove’s mouth, were built many warehouses and wharf’s to handle the ships and their cargoes. Many of the houses in the North Cove area today were built by sea captains or ship owners, The ships sailing to and from Saybrook visited Europe, Africa, and South America, but their primary trade was with the West Indies and along the eastern seaboard.

The Old Saybrook Land Use Department has placed a large and useful collection of links to historic resources on its website: https://www.oldsaybrookct.gov/historic-district-commission/pages/resources