Here on this winding and hilly road lined with rugged stone walls sits a large white onion-like object ringed with lines of tattered colored flags blowing in the breeze.  If a passing motorist sees it at all they can be pretty sure they haven’t seen another one like it anywhere else.

This mysterious white creation rises some 14 feet and at its bulge is roughly 10 feet wide.  It is constructed of brick overlaid with painted white stucco.  Each side of the square base has steps of enlightenment to the domed top where a statue of Buddha can be seen behind glass.  It is a spiritual monument that represents the Buddha and serves as a place of meditation known as a stupa.

These flags are made with threadbare edges and are meant to gradually wear away from the effects of the wind thereby spreading goodwill.  The five colors represent the elements of space, air, water, fire and the earth.

The story of this unusual structure begins after David Brown graduated from Dartmouth College and after working various jobs, decided to continue his education using the world as his classroom.   He set out to study agricultural economics in the Philippines but had difficulty gaining a visa so he decided to move on.

His journey brought him to the small, impoverished country of Nepal, set high in the Himalayas’ between Tibet and India, where he remained for three years taking photos and teaching in the small rural village of Syabru Bensi.

The experience changed me a lot, Brown notes, including an awareness of the role religion can play in a culture.  Upon his return to Old Saybrook Brown worked to encourage Tibetan immigration to Connecticut and in July 1992 six Tibetans arrived in the state, two of whom became residents in Old Saybrook. 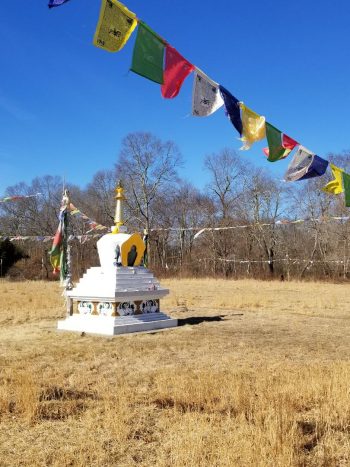 Today there are perhaps 100 or so Tibetans residing in Old Saybrook, and perhaps as many as 1,000 Tibetans in Connecticut.

Many Tibetans follow the teachings of Buddha and there are roughly a million Buddhists in the U.S., first arriving in the 1820s and becoming more numerous following the California Gold Rush and the building of the transcontinental railroad in the mid-1800s.

Brown long held the dream of building a stupa and was encouraged by his Tibetan friends.  But it was not easy or quick.  In addition to the manual labor, there were Buddhist customs and rituals for every step of the process.

Ground was broken in June 2006 and with the help of many volunteers to mix mortar and place 5,000 bricks and Tsultrim Gyatso, a Buddhist monk from Middletown, who assisted in the construction and adherence to Buddhist traditions and procedures.

The stupa was formally consecrated in April 2007 in ceremonies attended by religious leaders of many faiths, civic leaders and several hundred people.  It is the first stupa built in Connecticut.

At the consecration ceremonies, Buddhist monk Tsultrim Gyatso placed in its center a cedar “tree of life” in which he had carved prayers.

The stupa is set in the center of a large field and, according to Brown, people stop by all the time and it is available to the public during daylight hours.  “Buddhists respect the validity of every religion,” says Brown, “so it’s really meant to be for the welfare of all human beings.”   It’s a good message for modern times.  Guess Buddhists would call it the beginning of enlightenment.