Many bad stories begin as author Sir Edward Bulwer-Lytton began his 1830 novel, “it was a dark and stormy night; the rain fell in torrents – except at occasional intervals when it was checked by a violent gust of wind which swept up the streets….”

This sorry opening line is also the regrettable reality for what actually occurred when tropical storm Irene dumped four feet of water into the popular shore front restaurant Dock & Dine in August 2011.

The surging water destroyed the restaurant’s interior and everything inside had to be gutted and redone or replaced.   A completely new kitchen was installed and the interior was rearranged.   These were the most extensive renovations made since Dock & Dine began in the 1940s.

The new facility provided a light, bright interior with incomparable views of the water and re-opened to enthusiastic customers in September 2012.  But that was not to last long.

One month after reopening, in October 2012, on another dark and stormy night when torrents of rain and gusts of wind tore into the building, Super Storm Sandy arrived.

It ripped open the roof and left 18 inches of water in the building.  It destroyed everything – bars, partitions, furniture and all the improvements made during the previous year as a result of Irene.  Once again it was a shambles.  Damage was close to one million dollars.

At that point, the building had sustained structural damage and federal flood regulations required structures to be rebuilt to code if repairing them is more than fifty percent of the original market value. 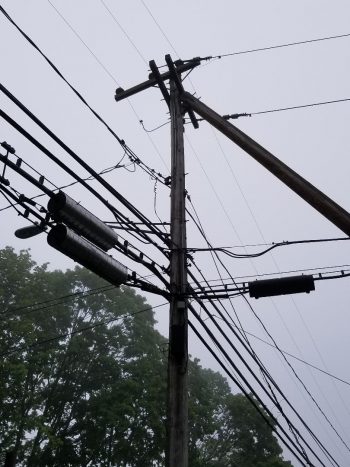 The building was demolished and plans made to rebuild on piles 14 or more feet above the water level.

Plans for a new facility were approved by local land use officials but delays in securing financing, negotiations over complex flood zone regulations, and with the burden of other restaurant projects, owner Jon Kodama has not moved on resurrecting Dock & Dine, a business he has owned since 1987.

With several other restaurants to manage, plus the previous losses, the troubles and expenses for rebuilding, and a variety of tangled regulations for new construction, few would blame owner Kodama if he decided to walk away without rebuilding.

It is going on five years now with neither construction nor much attention to the site and it shows.  The accumulation of debris and the growing unsightliness of the property is becoming a health and safety issue that discredits the owner and reflects poorly on the town.

Saybrook Point remains a notable destination spot.  Visitors and local residents come here to see the historic Saybrook Fort site, the statue of the soldier-engineer Lion Gardiner, the monument to George Fenwick, examine the remaining features of the railroad, and view the environmental sites of the nearby marshes and natural habitat.

With no movement on constructing a new restaurant, and no apparent effort to maintain or improve the property, the time has come for the owner to build or sell.  And, there would be no better owner of this place where the river meets the Sound than the people of Old Saybrook.