The Obed Heights neighborhood in Old Saybrook is presumably named after an Indian named Obed. The legend is that he was the son of a Hammonasset Chief. Harriet Chapman Chesebrough (1819-1897) recalls this legend, (which is a long and tragic story). In her collection of memoirs, Glimpses of Saybrook she reports, “He (Obed) lived above the junction of the shore line and Valley Railroads where the land rises.” Thus we may assume this is the origin of the name Obed Heights.

Aside from the legend of Obed, there is a very distinctive feature of Obed Heights: A private reservoir surrounded by 124 acres of very private land. It sits on a hill approximately 300 yards north of I-95 between exits 67 and 69. 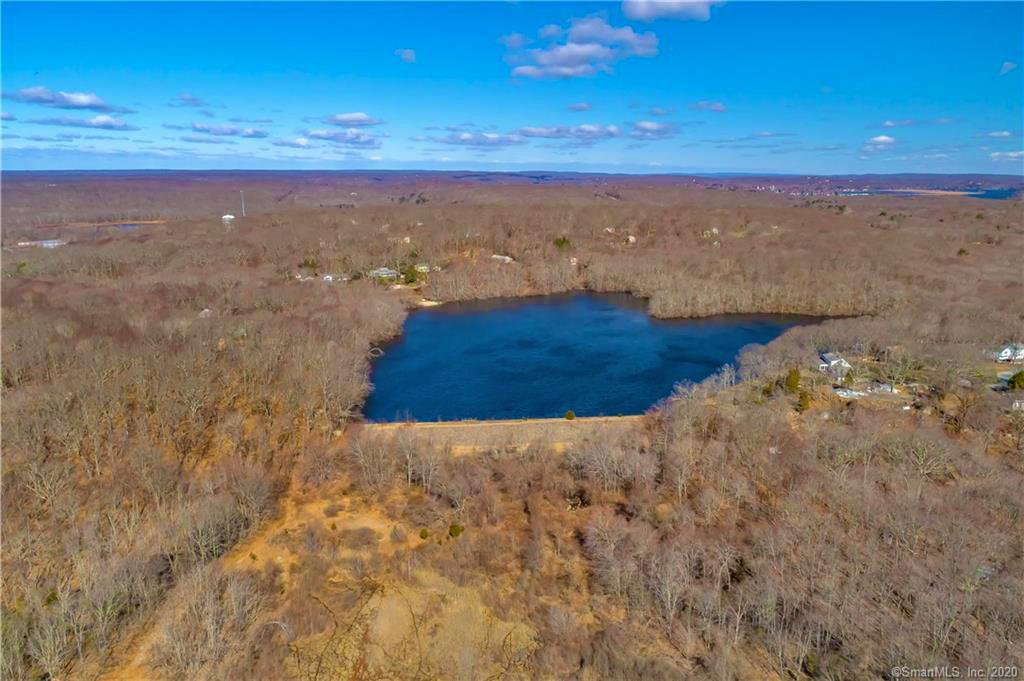 The dam (shown above) was completed in 1889 by the Old Saybrook Water Company. This company was incorporated in 1885 for one purpose, but not the purpose stated in its 1885 incorporation papers.

The Old Saybrook Water Company’s principal parties were George M. Denison, Frederick M. Denison and John T. Beckwith. According to the incorporation papers, “The purpose of the company was to supply water to the town of Old Saybrook for public and domestic use.” Further, the company, “was empowered to open grounds in any streets, lanes, avenues, highways and public grounds for the purpose of laying pipes as may be necessary.” But they only laid one 8-inch pipe, about three quarters of a mile long, from the reservoir to a water tank at Saybrook Junction. The water tank was a 23,350 gallon octagonal brick water tank built at the junction to resupply water to the steam-powered locomotives. 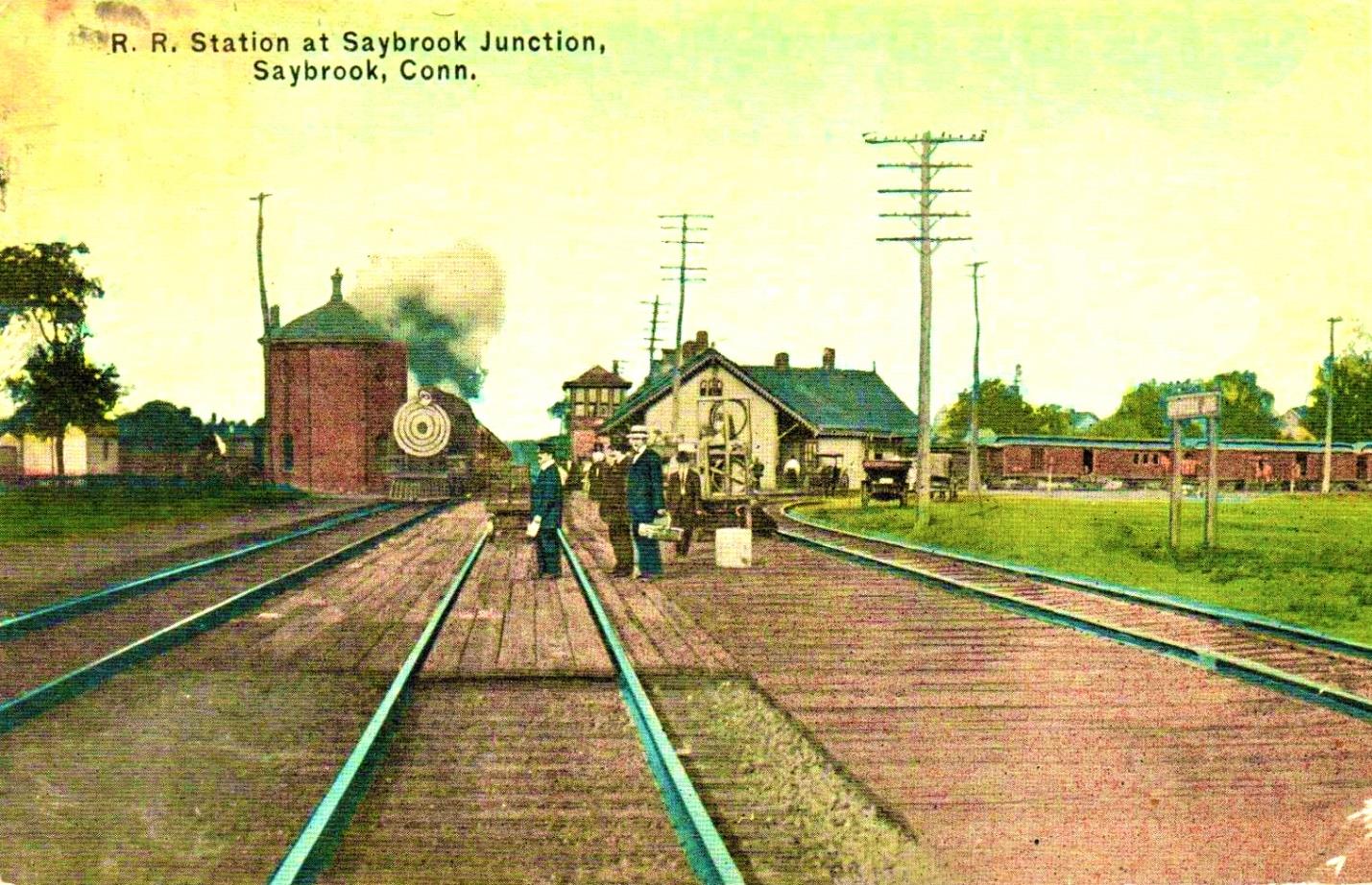 Steam locomotive tenders, attached behind the engines, were the train’s fuel supply. Initially carrying wood to burn as fuel, then later coal, tenders also carried lots of water to be boiled to make the steam for propulsion. By the 1880’s steam locomotives could travel about 100 miles without stopping for additional water for their boilers. With the completion of the 210 mile shore line route from New York to Boston, Old Saybrook became a most convenient “water stop” for the trains, being almost exactly mid-way (100 miles) between the two cities.

This handy coincidence was the reason for the Old Saybrook Water Company’s existence. At the time of the company’s incorporation in 1885, Saybrook Junction had two railroads running through it: the Connecticut Valley Railroad coming down from Hartford to Saybrook Point and Fenwick, and the shore line route running between New York and Boston. Also by then, rail travel along the coast was greatly improved due to the newly constructed Old Saybrook railroad bridge across the Connecticut River, completed in 1870. Prior to that a railcar-ferry carried train cars across the river which was both cumbersome and time consuming. While the engine remained in Old Saybrook, the train cars were put onto the ferry and then reassembled in Old Lyme with a new engine. A similar railcar-ferry crossed the Thames River in New London. The folks at the Old Saybrook Water Company knew that shortly, in 1889, the bridge across the Thames River in New London would also be completed. This eliminated all train ferries along the shore route to Boston and made the line all that more popular and time-efficient. The shore line route to Boston quickly became the fastest and most popular route between the two cities. Lots of water therefore was needed for lots of steam engines, both passenger and freight. Some stops could use almost 2,000 gallons. No records could be found showing the cost of this water but apparently it was worth the investment of building the dam. 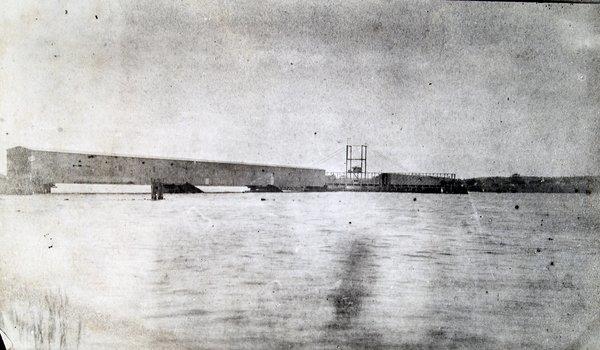 A small stream had always meandered down through the hills of Obed Heights and eventually emptied into what is now Ragged Rock Creek. The dam the water company built across that stream created the Obed Heights Reservoir. The run-off from the dam still flows today into Ragged Rock Creek. What has been shut down is the 8-inch pipe that supplied water to Saybrook Junction’s steam engines. 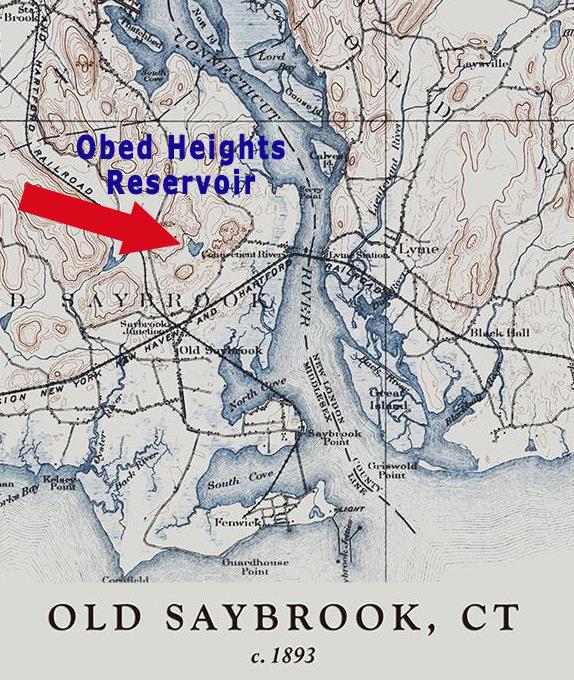 The dam was completed between 1885 and 1889. This topographical map circa 1893 is perhaps the first map to show the man-made reservoir on Obed Heights

With the train ferries eliminated, the business plan for the Old Saybrook Water Company looked like it was on sound financial footing. Unfortunately, new steam locomotive technology was about to insert a fatal flaw into their business plan. Aside from train ferries across rivers, “water stops” were still a great annoyance to railroads. Like the ferries, they greatly lengthened travel time, and time was money. By the time the Old Saybrook Water Company was incorporated, new steam locomotives were already being built that could travel well over 150 miles without taking on water. This pushed the required “water stop” for trains travelling from New York toward Boston well east of Old Saybrook. Further pain was inflicted when the Connecticut Valley Railroad built a “water stop” at Saybrook Point, probably pumping river water.

These factors caused the demise of the short-lived Old Saybrook Water Company. Due to fairly low water pressure from the small reservoir, there was never an ability to supply the town of Old Saybrook with water for domestic use. There was only about a 50 foot drop in elevation between the reservoir and the junction, insufficient for adequate water pressure in Old Saybrook neighborhoods.

How long the Old Saybrook Water Company was in business is not known, perhaps 20-years or less. Nor is it known whether it made money for the stakeholders: the stockholders, principals and other investors. When the town tax assessment exceeded the value of the corporation, the principals of the company wrote, “We do not intend to pay a tax on that assessment simply to supply a water tank for a rail road.” The Old Saybrook Water Company ceased operations. The exact date is not known, probably in the early 1900’s. The company’s only asset at that time was the reservoir and its surrounding land which they determined had very little value except for farming. By the 1930’s depression, all the land sold for a reported $1,000. 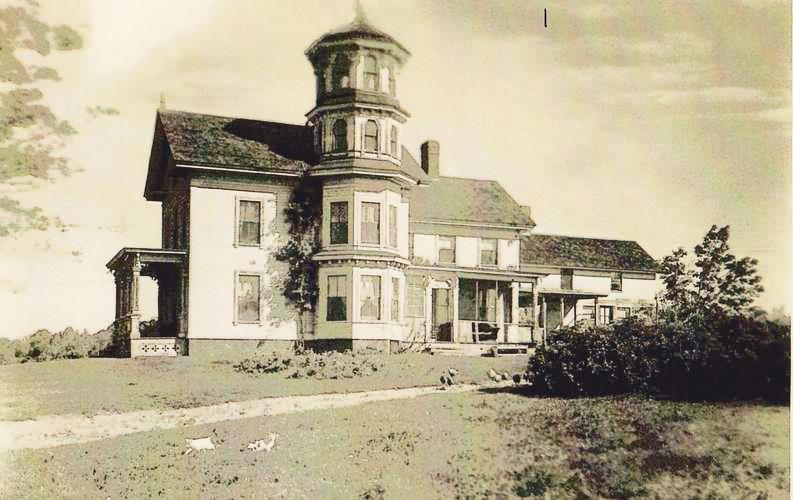 Sometime between 1875 and the early 1880’s someone built this farmhouse, adjacent to the extensive reservoir farmland. Known for a time as Fairview Farm.

Today, many residents of Old Saybrook will recognize the former farmhouse. 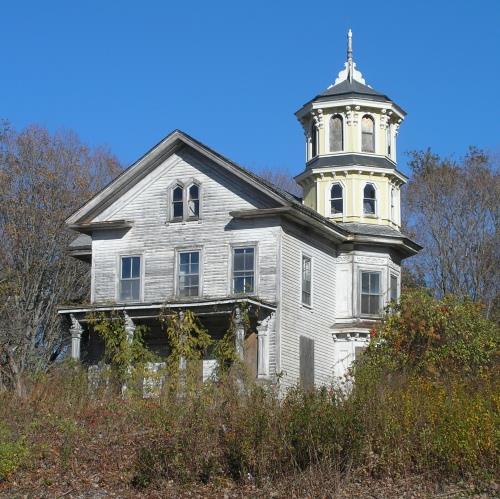 The house has been abandoned for decades. Its recent claim to fame was when the exterior was used in the 1971 classic low-budget vampire horror film, “Let’s Scare Jessica to Death.” 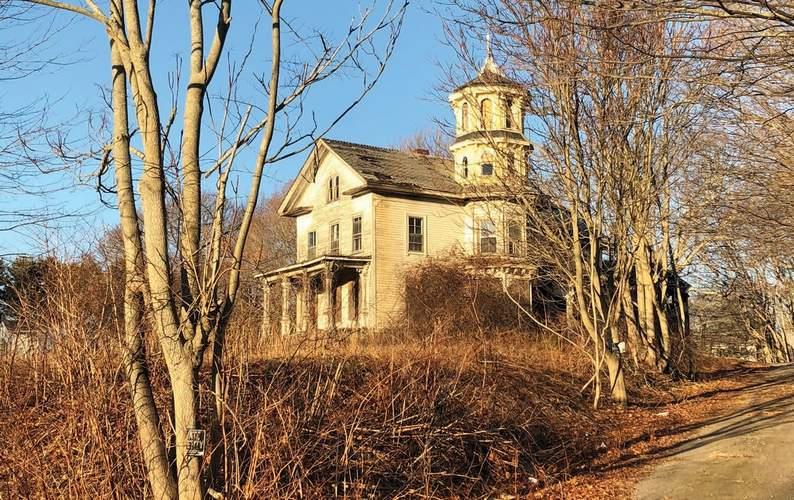 The precise chronology of the reservoir land ownership is fuzzy. Much of today’s Obed Heights, especially the land sloping down to what is now route 154, was farmland. At the time of the 1885 incorporation of the Old Saybrook Water Company, two of the principals were named Denison. Records show that a foodstuffs entrepreneur from Hartford named J. B. Newton bought (Obed Heights) farmland from a Denison family. It was called The Fairview Farm. His property apparently included the dam and the reservoir, but he was not involved with the sale of water to the railroads. He did, however, live in the existing farmhouse (possibly built by early Denisons?) as his summer home.

Fairview Farm raised dairy cows, sheep, various crops, fruits and chickens. The produce was sent via the Connecticut Valley Railroad to Newton’s Hartford markets. By the 1930’s depression, the farmhouse and land were purchased by Fred Pointkowski (1893-1968) for a reported $1,000. What happened to Mr. Newton is not known. The Pointkowski family still owns the property today.

The land was passed on to the son, Carl Pointkowski (1931-2013). It’s reasonable to assume that parcels of the land were sold off over the years to developers, thus allowing the homes in and around Obed Heights and the reservoir to exist. But 124 acres are still owned today by the Pointkowski family, making it perhaps one of the largest tracts of private land in town. 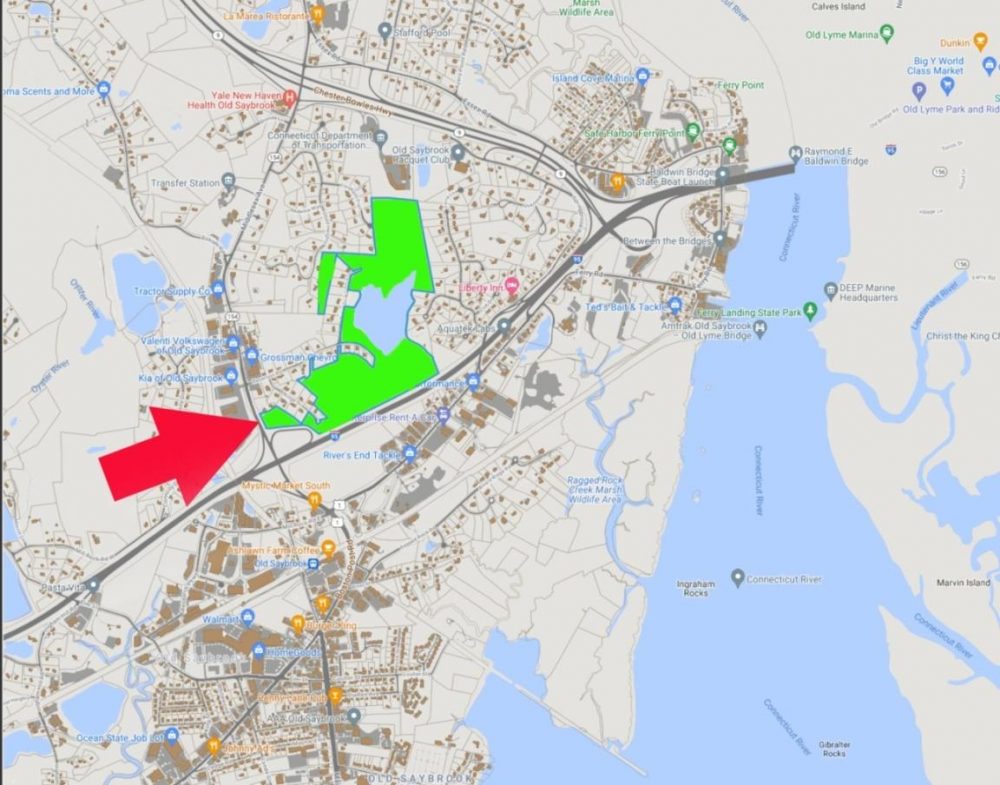 The current town tax-assessor map shows today’s Pointkowski family-owned land (in green) including the dam and the reservoir. The red arrow points to the location of the abandoned farmhouse, across the street from the Jeep dealer in the Auto Mall on route 154. The land and house have been listed for sale numerous times, and then delisted for unknown reasons. The last asking price was close to $6 million. The small indentation of private land touching the reservoir is an Obed Heights Association neighborhood park and beach (below). 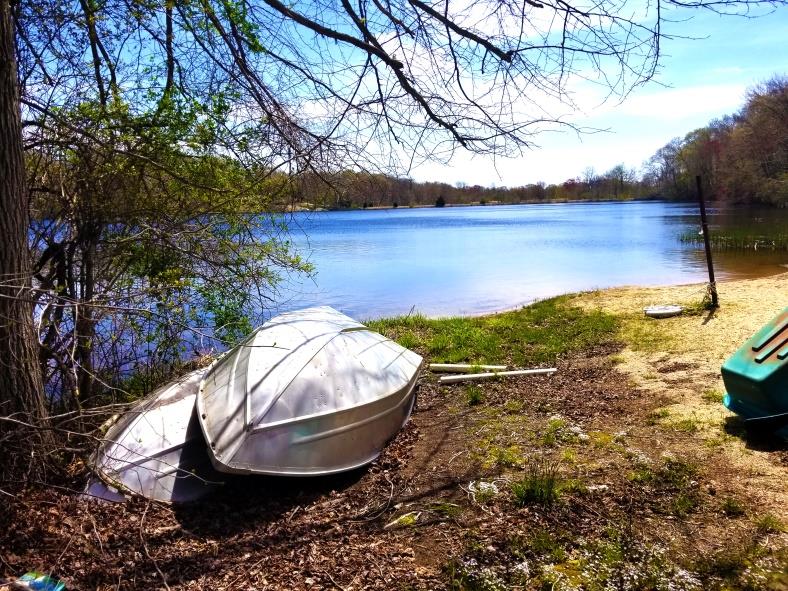