It’s just an odd half acre lot bordered by two streets and a sidewalk that a Google drone would see as a triangle with a few trees, a couple of benches and two historic markers.   Many people don’t know its name or background but over the years it’s been called the Church Green, the South Green or the Trivet Green.

Shaped like the set at the start of a billiards game and located where Pennywise meets Main, this little lot has played a distinctive role in the life of the community and the nearby First Church.

For many years there was some doubt about the ownership of the triangular plot of ground opposite the church known as the “Green” but the matter was eventually clarified when the borders were given as being bounded on the east by the “great highway,” the southwest by a “highway called Pennywise Lane,” and northerly by the homestead of John Pratt and Isaac Pratt.

The little lot has ties to the First Church.  Within the first hundred years of the founding of Saybrook, the first two meeting houses were built at Saybrook Point, the first in 1647 and the second in 1681.

The third meeting house was built in 1726 further north on this small plot of land given by John Pratt and his son Isaac at the junction of Main street and “the road leading to Oyster River.”

The new meeting house measuring 48 feet long by 38 feet wide and the entrance faced south.  A bell tower was installed in 1794 and tolled for weddings and wakes.

The building remained for more than a hundred years until the late 1830s when a building committee consisting of George Pratt, George Dickinson and Amos Sheffield was appointed and a lot was purchased across the street from Mrs. Anna Chalker.

The committee was given very specific instructions that the primary woods were to be white oak, yellow oak, and chestnut and that there were to be three coats of paint.  The meeting house, which remains today, was dedicated in January 1840.

The old site was abandoned and forsaken until five or six years later when efforts were made to clear and level the ground, plant trees and plans made to erect a railing around the area.

The small area is surrounded by buildings that reflect the wealth and history of the town between 1760 and 1900 and a focal point for the neighborhood.

With its roots in the earliest days of Saybrook history, and listed in the National Register of Historic Places, the small site became the center of an 18th and 19th century community of prominent homes, and commercial and religious architecture and today is an irreplaceable asset to the town.

It’s just a small place with not much there, unless you know its roots. 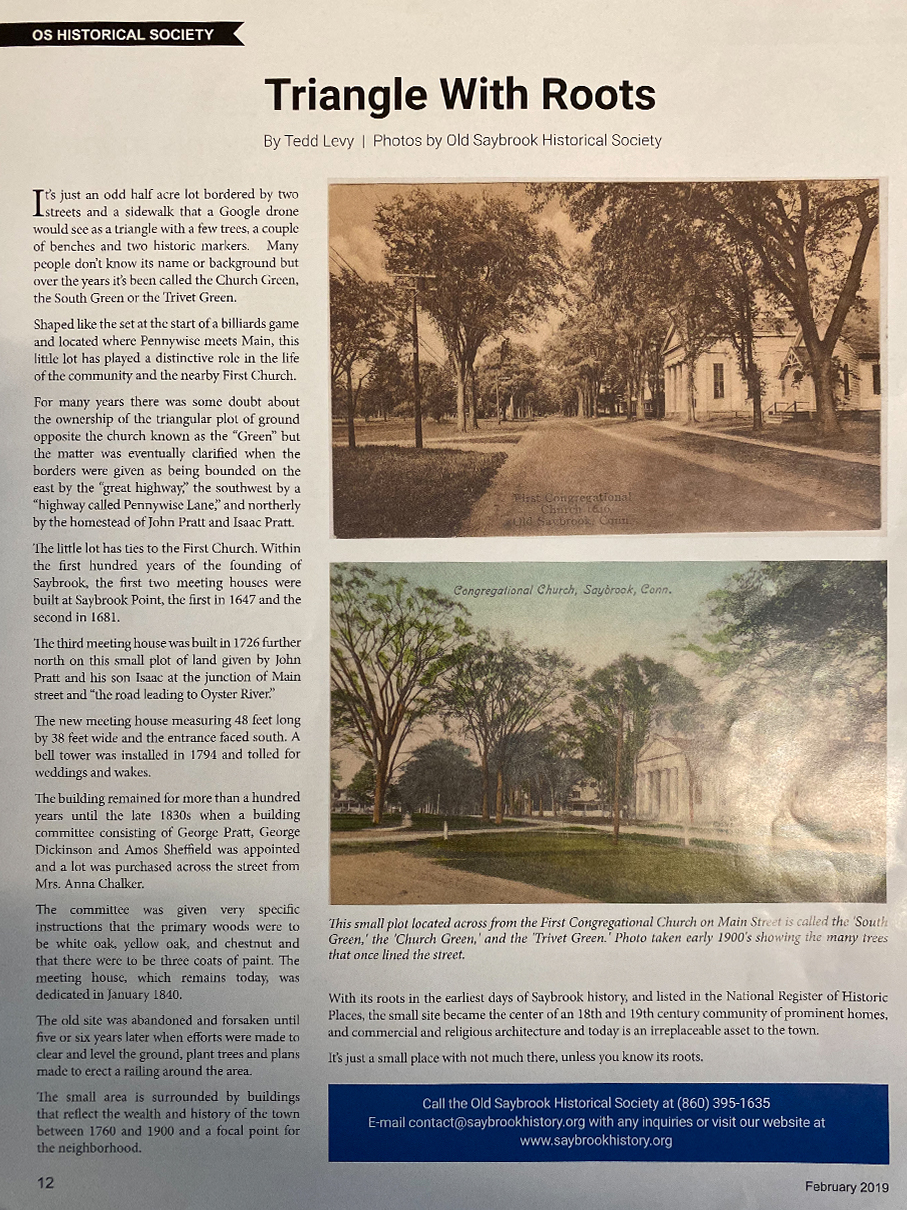